Today we’ll take a look at maps of Canada.  Some might ask “why?”, but I think the better question is, “why not?”  I think Americans in general don’t pay enough attention to Canada, even though the U.S. and Canada share the longest continuous land border in the world.  As occupants of the same continent, possessing similar economic and political interests, it makes good sense for Americans to learn more about our neighbors to the North.  Canada has a long, rich history, from its colonization by France in the early 17th century, to its acquisition by the British Empire in the wake of the Seven Years’ War in 1763, and finally to self-governance as a constitutional monarchy while retaining Queen Elizabeth II as head of state.

Let’s check out just a few of the fascinating maps of Canada from its early days as a French colony.

Starting off, there is the first map with the name Canada on it.  This was made in 1566 by Italian cartographer Paolo Forlani, before France had set up any permanent settlements in the region.  Even at this early date, however, you can still see some familiar names, such as Florida, Bermuda, Nova Franza (New France), Larcadia (Arcadia), Laborador (Labrador), and of course, Canada Pro, or proper, written in the space underneath a mountain range to the east of “Nova Franza”.  It is remarkable how even in vast expanses of terrain where European colonizers had not yet established settlements, they still managed to fill up the land with placenames. Second, there is one dating from 1613, shortly after Quebec City had been founded in 1608.  Produced by the explorer Samuel de Champlain, it features the latest geographical discoveries in the land that would become Canada.  The map serves partly as an advertisement to encourage settlement; it includes pictures of local flora and fauna, depicting the new territory as bursting with natural resources that are waiting to be enjoyed.  Notice how the map includes parts of the coastline of what would become upper New England, but it is difficult to recognize because there have not yet been any settlements.  We are still a few years ahead of Plymouth and the First Thanksgiving.

Finally, we have a map created by British cartographer John Barrow in 1759.  At this time, Britain and France were still fighting the Seven Years’ War, and Canada was still in French hands, though not for long.  The map shows the extent of Canadian possessions in the east, as well as some of the Northern territories of the thirteen American colonies, which would be shaking off British control a couple of decades in the future.  Barrow probably did not realize that the world he was depicting on the map would not last long, with the French lands turning British, and most of the British lands becoming independent.

Thanks for joining me on this brief cartography journey through early Canadian history.  For more on these maps, check out these sources: All About Canadian History Blog, The Newfoundland and Labrador Historic Map Archive, and Barry Lawrence Ruderman Antique Maps Inc.

It may seem silly, but quite a lot of time and attention has been expended by people trying to create their own Earth sandwiches, ever since blogger Ze Frank issued the challenge in 2006.  For the adventurous cartography nerd, it’s just the sort of challenge to accept.

The key for anyone aspiring to fix an Earth sandwich is to determine the location of the antipode for their current location.  The antipode is the direct opposite of a certain coordinate on the earth’s surface.  If you drilled down into the center of the Earth and kept going until you reached the other side, you will have found your antipode.  Unfortunately, it’s much harder than it may seem to even find suitable locations, given the amount of ocean that covers the Earth’s surface.  Many of us who grew up in the US believed as kids that if we dug straight through the Earth we’d wind up in China (and Bugs Bunny cartoons did their part in reinforcing this).  In reality, though, the antipode of any location in the continental US is somewhere in the Indian Ocean.

The following map, courtesy of Mr. Reid’s blog, shows the earth flipped upside down and laid over itself, so you can see where land overlaps in green.  These are the only locations where an Earth sandwich can be successfully assembled.

Overlaid map of the world, showing locations where antipodes exist over land in green (via http://wordpress.mrreid.org/2013/12/20/earth-sandwich/)

A whole lot of the world is, sadly, out of luck when it comes to making their own Earth sandwich.  Residents of North America will have to travel to the Canadian Arctic to lay a slice of bread upon the ice, and have a friend in Antarctica do the same.  Or they can head down to South America, where significant areas of countries such as Chile, Argentina, Brazil, and Peru overlap with Asian countries like China, Cambodia, and Vietnam.

There are a few other interesting antipodes as well.  Look at the Iberian peninsula in Europe and you will see a couple splotches of green.  These match up with the islands of New Zealand way in the South Pacific.  In fact, as Ze Frank reports, the very first Earth sandwich in the world was created at these locations, with one side near Madrid, Spain and the other near Aukland, New Zealand.  Pretty cool!

The mere existence of the Earth sandwich shows the depth of imagination which map nerds share.  Sure, the sandwich can’t be eaten, but to a geography obsessive, it satisfies a different kind of hunger.

For more on the Earth sandwich, check out Ze Frank’s page here: http://www.zefrank.com/sandwich/

Compared to fantasy maps, maps of real world cities can be kinda boring.  Streets and highways criss-cross the land, and empty spaces are few and far between.  Points of interest are indicated by dots, and parks are represented by bland green rectangles.  There is not much majesty or wonder in the standard city map, let alone dragons or castles.

Fortunately for us fantasy map nerds, one cartographer on Etsy set out to change that.  His name is Stentor Danielson, and he sells fantasy maps of American cities along with hand-cut paper street maps and custom order maps on his Etsy store page: Mapsburgh.

See familiar cities in a whole new light, as they might look if Tolkein had used them for the setting for an epic fantasy journey.  Now buildings are represented by towers and castles, parks look like enchanted forests filled with trees, and every mountaintop looks dark and foreboding.  The mystery and sense of adventure that has all but disappeared from cartography in the modern era is back to add some spice to otherwise bland city maps.

Have a look at a few of Danielson’s most impressive creations below: 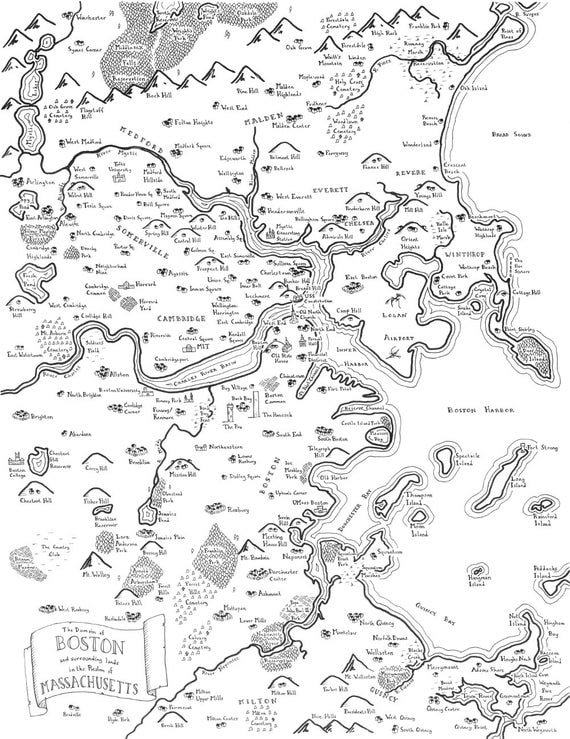 Fantasy Map of Boston, by Stentor Danielson, via https://www.etsy.com/ca/listing/202728481/fantasy-map-of-boston-poster?ref=shop_home_active_3 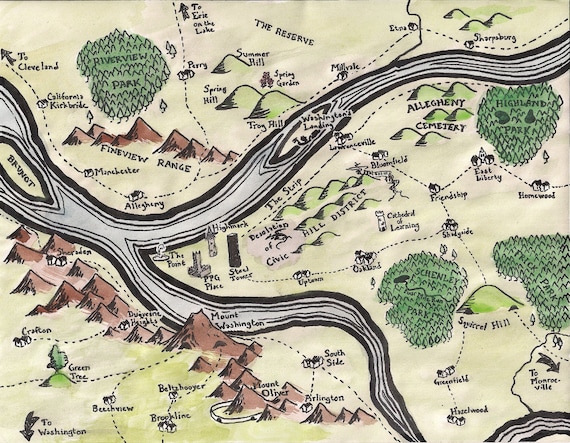 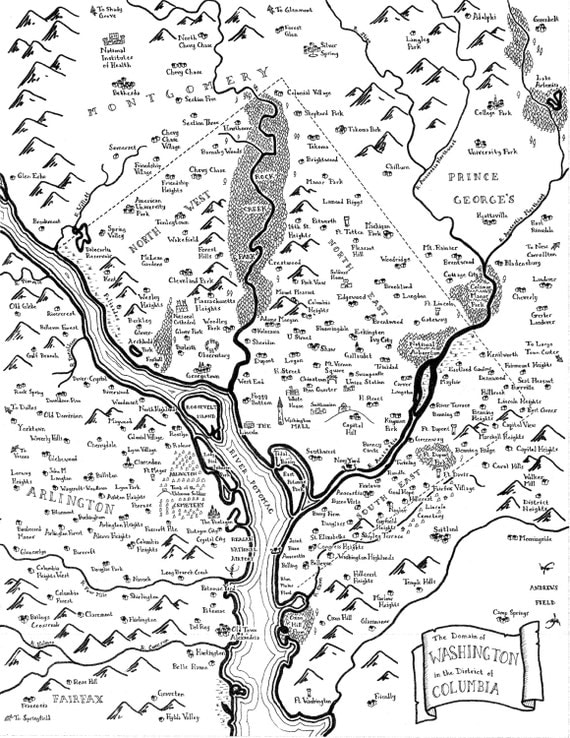 Fantasy Map of Washington, DC, by Stentson Danielson, via https://www.etsy.com/ca/listing/192769352/fantasy-map-of-washington-dc-poster?ref=shop_home_active_11

For more, check out Danielson’s Etsy page: https://www.etsy.com/ca/shop/Mapsburgh.  He also has maps of Cleveland and Philadelphia.  They sell for between $11 and $26, and for $69 you can order your own custom fantasy map, the perfect gift for any serious cartography nerd.

There is no land left to discover on earth, and all the blank spaces on the map have been filled.  But the oceans still largely remain unexplored.  They are vast, deep, and darker than we can imagine at their deepest depths.  Light only travels so far, and water pressure makes it impossible for humans to descend much further.  This partially explains why it has been so difficult to locate the Malaysian Airlines flight that disappeared over the Indian Ocean earlier this year.

But now, satellites have once again come to the rescue, and researchers at Scripps Institution of Oceanography at UC San Diego have used European and American satellite data to create maps of the entire ocean floor.  As Loren Gush at Popular Science reports, these new maps reveal never-before-seen mountains and valleys under the surface, and help to highlight the faults between tectonic plates.  Here is one image of the North Atlantic:

These oceanographic maps also have a practical purpose beyond purely satisfying mankind’s curiosity.  For example, knowledge of the presence of underwater ridges helps to explain gravity fields, which influence the trajectory of submarine missiles.  One hopes that this also leads, eventually, to a fully mapped ocean floor in high definition, so that the next time a plane crashes in the ocean, it will be located and recovered quicker.

This is also a reminder to the explorer who looks up at the stars, yearning for new undiscovered mysteries, that the ocean on our humble planet Earth still contains an expansive, unseen world.

For more on this, here is the Popular Science Article: http://www.popsci.com/article/science/satellite-data-maps-sea-floors-hidden-depths?src=SOC&dom=tw

And for more on the results of the research, go here: http://topex.ucsd.edu/grav_outreach/