In 2013, Nancy Lublin launched the world’s first crisis-intervention hotline that utilized text messaging.  The Crisis Text Line (or CTL) allows anyone to send a text about their situation (such as bullying, suicidal thoughts, or physical abuse) to the number (741741), and a trained volunteer counselor will respond and provide support.  This service has been so useful because many problems that people, and in particular teens, face are difficult to raise with a parent or authority figure, so texting provides a more discrete way to reach out for help.  After two years, and six million texts, Lublin and the CTL team have helped a lot of people and learned a lot about the types of crises that are being experienced across the United States.

Lublin took what she learned from all those texts and launched a sister site, CrisisTrends.com.  The site synthesizes the data from teens into charts and maps to show the prevalence of certain types of crises across time and geography.  The data are able to show the likelihood of a text concerning a certain issue being sent at a certain time of day or day of the week.  For example, suicidal thoughts tend to occur most frequently at 7pm and 8pm, followed closed by 12pm.  The site also features maps ranking the states by the prevalence of each type of crisis, indicating that, somewhat surprisingly, the most anxious states are New Hampshire, Connecticut, and Hawaii, in that order.  Lublin hopes that this information will lead to better services, as local support systems become better tuned into the specific problems facing their areas.

Below are a few maps from the Crisis Trends site.  The first is the map of Anxiety:

Map of Anxiety (via CrisisTrends.com)

Next is the map of where teens are most affected by eating disorders.  According to the data, Arkansas is ranked first followed by Maine and Virginia.

Map of Eating Disorders (via CrisisTrends.com)

Map of Suicidal Tendencies (via CrisisTrends.com)

Crisis Trends is a great reminder that maps are not just good for navigation or intellectual stimulation. They can also be a potent force for social good.  Spread the word about Crisis Trends so that policymakers and local officials can utilize this data to know where crises are more likely to occur and work more effectively to help those in need.

In 1884, in the city of Madaba, Jordan, an ancient floor mosaic was discovered in the ruins of a long-abandoned Byzantine church.  Containing millions of tiny tesserae, the mosaic depicted important locations of the Middle East, including Jerusalem, the Jordan River, the Dead Sea, Mt. Sinai, and the Nile Delta.  Greek text fills the empty spaces, explaining the religious significance of various locations throughout the area.  Based on the buildings present in the map’s view of Jerusalem, it was determined that the mosaic was created some time between 542 and 570 A.D., which makes it the oldest surviving map of Jerusalem and the biblical Holy Land.

The mosaic was restored as well as it could be, but the original colors have faded and some of the pieces are missing.  There are, however, numerous colorful reproductions. Below is a section from one of these reproductions, which shows Jerusalem in a prominent central position, and the Jordan River flowing into the Dead Sea at the top.  This mosaic may have served as a guide for Christian pilgrims traveling to Jerusalem and other biblical sites during the early middle ages.

Photograph of a reproduction of the Madaba Mosaic Map.  Photograph taken by Lakshmi Sharath, via http://www.lakshmisharath.com/2014/05/27/souvenirs-jordan-madaba-mosaics-sand-art-petra/

Here is a reproduction of the full Madaba Mosaic:

Reproduction of the Madaba Mosiac Map, by Bernard Gagnon, via http://en.wikipedia.org/wiki/Madaba_Map)

The Madaba Mosaic can be a little disorienting at first.  The full view, shown above, has several large chunks missing, including most of the Mediterranean Sea.  In addition, we are used to maps having North at the top, but this mosaic, like so many from this era, has East at the top.  Even accounting for that, the orientation still does not quite make sense to me.  The Nile River delta is located in the bottom right corner of the mosaic, but Jerusalem is on the left side of the mosaic.  In real life, Jerusalem is East and a little North of the Nile River delta.  Shouldn’t the Nile be underneath Jerusalem on this mosaic?  Perhaps someone with more cartographic expertise could shed some light on this.

Today, the Madaba Mosaic is not useful for anything more than artistic appreciation.  When examining it, though, I do get the sense that it was a very impressive cartographic depiction at the time it was made. The locations included are rather extensive, and if I could read all the ancient Greek, I would probably be even more impressed with the biblical information cited.

The mosaic was not in use for very long, because Madaba was conquered by the Persians in 614 A.D., then the Muslims in the 8th century, and finally the city was destroyed in an earthquake and abandoned in 746 A.D.  But during the mosaic’s relatively brief life, I am sure that it helped many a traveler find his way to Jerusalem.

I just finished reading “Wonderbook: The Illustrated Guide to Creating Imaginative Fiction” by Jeff Vandermeer, and I cannot recommend it highly enough.  Its 300 pages are filled with words and illustrations containing invaluable writing advice, as well as exercises, planning guides, and contributions from famous authors.  The book’s target audience is writers of genres like fantasy and science fiction, and it is clear that Vandermeer’s personal interests skew more towards the weird.  However, I think the lessons contained within are useful for every kind of fiction, because “Wonderbook” encourages the writer to think outside the box and develop full and meaningful characters and settings, whether those characters and settings are down to earth or completely off the wall.

From the front cover, I was immediately hooked by Vandermeer’s style.  The island city built on the back of a whale seems to say that nothing is quite as it seems in the fantasy world, and that sense of mystery and wonder is what a writer needs to harness in order to capture the reader.  From the illustrations and examples that Vandermeer employs, he seems to delight in the truly odd, often explaining a writing convention only to turn it on its head.  His first chapter, about inspiration fueling creativity, explains how the disparate identities and memories of the writer can combine in the writer’s mind to create the jolt of energy that gives rise to a creative idea.  The examples he offers confirm that stories can come from the most random and unexpected sources.

“Cognitive Transformation” by Ben Tolman, from page 26 of “Wonderbook” by Jeff Vandermeer.

Vandermeer goes on to describe the process for outlining a story, using the analogy of a living, breathing creature.  The story-creature must be properly assembled (the muscles, bones, and organs need to be functioning together), much like a story is built on top of a plot which has an internal logic and consistency.  If the author nurtures and feeds the story-creature, it can become a healthy adult creature.  However, as Vandermeer, shows in the diagram below, this is far from the final step in the lifecycle of a story:

“Wonderbook” also extensively delves into character development, plotting, worldbuilding (and mapping!), and revision.  I especially enjoyed one section where Vandermeer produces a few different beginnings for one of his published novels, “Finch”, and explains why he decided to start the novel where he did.  This is very helpful, because the decision of which exact moment to use at the opening of a novel affects the level of tension that is infused in the first scene, which in turn sets the tone for the rest of the novel. Vandermeer also spends time talking about proper endings, and even middles, which is another topic that doesn’t usually receive much attention.  Here is one map from the book which depicts the perils that await in muddling through the middle:

Map of the Middle Zone, from page 118 of “Wonderbook”

Vandermeer’s “Wonderbook” is a rich and engaging guidebook for the creative writer.  Its advice is practical, its examples are colorful, and it is sure to inspire any aspiring author to start putting pen to paper (or hands to keyboard).  You can pick it up from Amazon here:  http://www.amazon.com/Wonderbook-Illustrated-Creating-Imaginative-Fiction/dp/1419704427

Minecraft is an open-world computer game that lets users build their own environments completely out of pixellated 3-D bricks.  There are multiple ways of playing, but the most intriguing part of the game, to me, is that fact that you can create an entire world and share it with other players.  I’ve never played Minecraft myself, but from the looks of it, the only limit to what you can create is your own imagination.  You can spend a lifetime browsing through Minecraft user-generated maps online and never run out of impressive creations.

Here are a few of the most striking Minecraft creations I found, depicting some of the most popular fantasy worlds from books, videogames, and film.  Enjoy!

Thunder Bluff, from World of Warcraft:

Thunder Bluff, recreated in Minecraft, created by the user Rumsey on Minecraftforum.net (via http://www.cnet.com/news/massive-world-of-warcraft-map-in-minecraft/)

Koholint Island, from The Legend of Zelda: Link’s Awakening:

Koholint Island, recreated in Minecraft, created by DemiuM666 on deviantart.com (via http://demium666.deviantart.com/art/The-Legend-of-Zelda-Minecraft-s-Awakening-317516376)

The Planet of Hoth, from Star Wars: The Empire Strikes Back

Hogwarts, recreated in Minecraft (via http://www.ign.com/articles/2012/09/18/these-14-harry-potter-minecraft-builds-will-blow-you-away)

King’s Landing, from Game of Thrones.  This link has several more maps and videos of scenes from Westeros:

Art comes from the most unexpected places sometimes.  For example, take a look at some of the urban maps below.  Upon a drab canvas of criss-crossing streets and empty spaces are a web of vibrant lines that resemble colored pencil marks, practically jumping off the page.  The deep red pathways are like the lifeblood of the city, pumping through its avenues as the city’s residents rush to work, or to dinner, or the theater.  We can see the cultural and economic activity of each city by these highlighted pathways, and we almost don’t need a tourist map.  These pathways are the ones we instinctively know we want to be on.

These maps were created by Eric Fischer over the past five years, and are assembled at his Geotaggers’ World Atlas site.  There, he explains how he used data to create such beautiful maps.  First, he scanned through Flickr to determine where people were taking interesting photos in the world’s cities.  If he saw a clusters of many photos in one place, that led him to believe that that place was worth seeing.  Then, he connected these popular sites, and colored the paths between them based on the speed. The red lines, for example, are faster than walking speed, and could be people on bikes or ferries.  You can zoom into the maps too, and see how what appear to be thick pencil lines are actually collections of many different smaller threads.

Here are a few more: 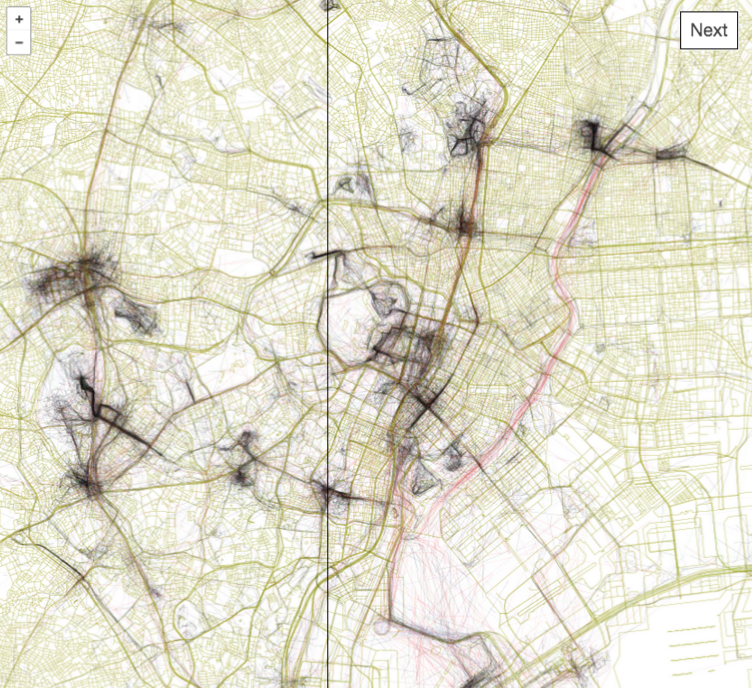 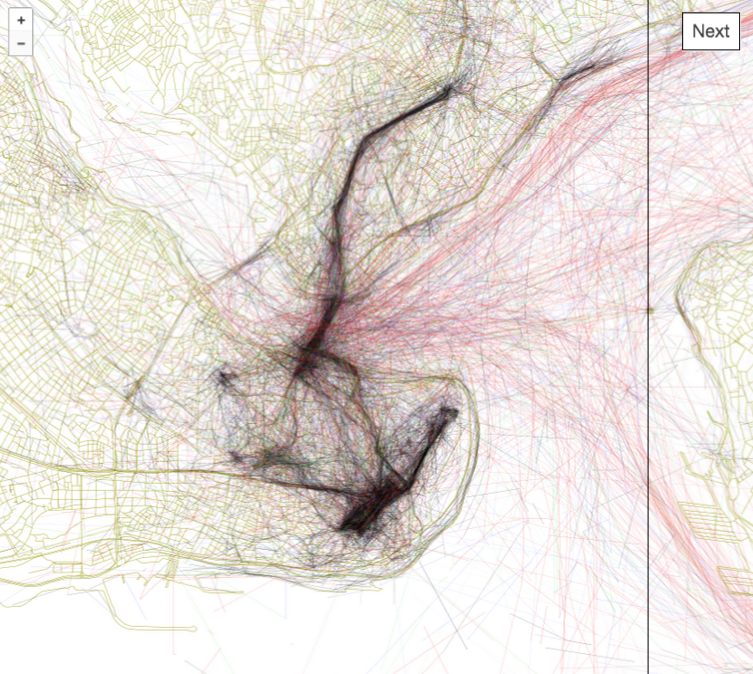 Check out the Atlas yourself, there are a ton of cities from all over the world available on there: https://www.mapbox.com/blog/geotaggers-world-atlas/