This past week, the 70th anniversary of the end of World War II was commemorated.  It was on August 15, 1945, that Japan, the last axis power, announced its surrender to the allied powers after two devastating nuclear bomb attacks on Hiroshima and Nagasaki.  It was a brutally destructive end to the most destructive period in human history.

From 1939 to 1945, the world was in a constant state of flux as the competing sides fought for geopolitical control.  Although the allied powers (initially led by France and the U.K., later joined by the U.S. and Russia) prevailed in the end, it looked very bleak indeed for the first few years of the war.  The axis powers of Nazi Germany and Italy had taken most of Europe and the French colonies in Africa, while Japan was quickly gobbling up areas of China, Southeast Asia, and the Pacific.  Only after 1944 did the allies reverse the trend, first taking back Europe and then pivoting to Asia.  The war officially ended on September 2, 1945, with Japan’s signature of the instrument of surrender.

The video below shows how the political boundaries of the axis, allied, and other powers shifted during every single day of the war from 1939 to 1945.  YouTube channel Emperor Tigerstar is remarkable in putting together videos of maps which illustrate the change in political power over periods of time, such as the rise and fall of the Roman Empire.  This video is a great example of how a well-made map can often explain a story better than words ever could.  As you watch the front lines change, and listen to audio from speeches given by figures such as President Franklin Roosevelt, you can almost picture these historical battles happening before your eyes.

During the six years of the war, over 70 million people died in total.  Violence of this magnitude has, thankfully, not been replicated since.  The two atomic bombs dropped over Japan have also been the only nuclear weapons to be used in war so far.  As we remember the events of 1945, let’s also recognize the importance of restraint and diplomacy in resolving international conflicts in the future.  The great turmoil and destruction of the war have become a memory which grows ever more distant.  As political extremism around the world is once again on the rise, let us hope that such levels of destruction never return.

This past week, one hundred years ago, World War I began as Austria-Hungary declared war on Serbia and drew the other nations and empires of Europe into the conflict.  The war drastically changed the course of the twentieth century, and the peace that was negotiated at the end unwittingly set the stage for World War II just two decades later.  In particular, it radically changed the borders of Europe, such that the map of Europe in 1919, after the Treaty of Versailles, was vastly different from the map in 1914.

The Economist recently published an article commemorating the anniversary of the start of the war, including a fascinating graphic that lets you “slide” between the maps and see just how each corner of the continent changed from the start of the war until the peace treaties had been signed.  You can check out the slider for yourself here: http://infographics.economist.com/2014/1914-19Swiper/1914.19.html

I took screenshots from the Economist post and have reproduced them below:

Border changes over the space of those five years were both great and small.  France and Denmark gained some territory at the expense of Germany.  The Austro-Hungarian Empire disappeared completely, succeeded by various smaller states (some of which would break up further later on in the century).  States which had previously not been independent, such as Poland, were able to reassert their independence.

The map shows how Germany in particular was punished by the allied powers at the end of the war.  What it does not show, of course, is the level of economic reparations levied against Germany, and the level of wounded pride the nation suffered, which laid the seeds for the rise of Hitler in the 1930s.

For more background on this, check out the source of these maps at the Economist magazine’s website: http://www.economist.com/news/international/21610243-redrawing-map

Who ever said the Victorians didn’t have a sense of humor? These colorful depictions of European powers from the 19th century show that even then artists were having fun with cartography and poking fun at national stereotypes.  The Englishman William Harvey published these maps, among many others, under the pseudonym “Aleph” in 1868.  His purpose behind creating the atlas, titled “Geographical Fun: Being Humourous Outlines of Various Countries”, was to excite the minds of children who would otherwise be bored by geography, perhaps inciting an interest in foreign lands.  Now the atlas has been digitized by the Norman B. Leventhal Map Center at the Boston Public Library, and you can view them on flickr here.  A few of my favorites are below:

Italy: “Thou model chieftain – born in modern days – Well may thy gallant acts claim classic praise.”  Italy is dressed a revolutionary figure, as this map was drawn right after the Third War of Independence and right before the final unification of the peninsula. 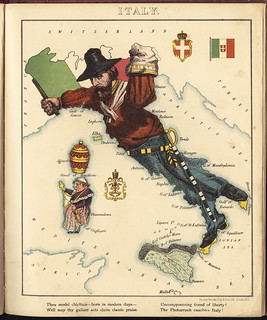 Germany: “Lo! studious Germany, in her delight, At coming glories, shown by second sight…”  Germany is an unfamiliar shape here, because Prussia occupied a great deal of land that would eventually become part of Germany. As such, Germany looks squeezed at the middle, much like a woman in Victorian dress squeezed at the waist by a corset. 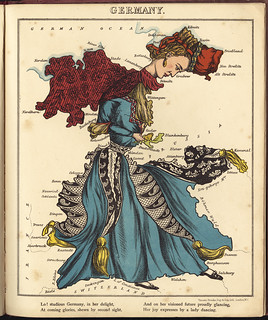 Russia: “Peter, and Catherine, and Alexander, Mad Paul, and Nicholas, poor shadows wander out in the cold; while Emperor A. the Second in Eagles, Priests, and Bears supreme is reckoned.”  It looks like the czar and the classic Russian symbol of the bear are tied together. But what about all of Russia’s land in Asia?  Surely there’s more room to stretch out? 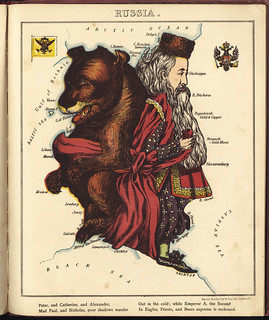 England: “Beautiful England, – on her Island throne, – grandly she rules, – with half the world her own…”  England, in the visage of Queen Victoria, appears stoic and assured.  After all, the sun never set on the British Empire at the time. 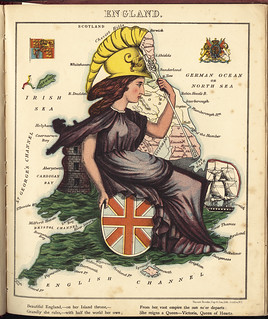 Scotland: “A gallant piper, struggling through the bogs. His wind bag broken, wearing his clay clogs. Yet, strong of heart, a fitting emblem makes for Scotland – land of heroes and of cakes.” Dressed in the traditional kilt, Scotland looks cold and anxious.  Maybe he’s planning to seek his independence? 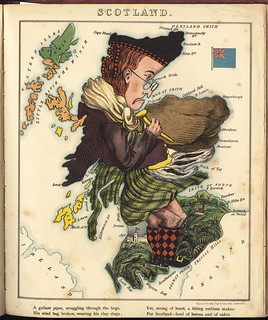 For more of these maps, check out the flickr page here: https://www.flickr.com/photos/normanbleventhalmapcenter/sets/72157632187636362, and for more on the atlas, go here: http://memory.loc.gov/ammem/gmdhtml/geofun.html.

By renaming a square in Berlin after Adolf Hitler.  It was an accident, and they have since changed it back to “Theodor-Heuss-Platz”, but this is still one of the worst mistakes that Google could possibly make.  And it shows again the importance we attach to place names.

Google Maps Image of Berlin showing “Adolf-Hitler-Platz”, which has since been changed (via PC Mag)

Such a colossal error was made possible by the open process of google maps editing.  We have come a long way from the days when only men of money and means could publish maps.  Now, anyone with an internet connection can suggest a change to Google Maps.  The only thing standing in the way of that change making it onto Google’s vast online database is a Google Maps moderator.  And as this case has shown, it may be easier to obtain a moderator’s approval than one might think.

An anonymous user suggested that “Theodor-Heuss-Platz” be changed to “Adolf-Hitler-Platz”, and moderator “Vilashi” approved that as the single name to be used for that square in Berlin, Germany.  It has been reported that this moderator has approved 24,000 edits in the span of about 18 months, so maybe this one just slipped past his radar.  Maybe he was adhering to historical precedent– the square did bear Hitler’s name from 1933 to 1947.  If anything, it could be listed as an alternative name, but it would still be completely unacceptable, especially in Germany.

In the end, Google realized the mistake, fixed it, and issued an apology.  Given the relative openness of the editing process, though, I wonder if this kind of error will be made again in other places.

The usage of Hitler to name a square in Berlin is just one extreme example of the power which attaches to placenames.  A name itself does not change a place, but a name can be deeply offensive since it is used to honor or commemorate a person or an event in time.  Think about how St. Petersburg was named Leningrad up until the end of the dissolution of the Soviet Union.  Changing the name back to Leningrad today would be seen as a terrible insult for many Russians as a memory of the oppression of that regime.  But the harm caused by placenames has also been felt in the U.S.  Racially insensitive terms have used freely throughout the country to describe such places as creeks and mountains, but fortunately most of these have been changed.  The name on a map signals to all who see it what that place represents to all, and an offensive name essentially says, to certain place, “this place is not for you”.

So I ask that we all read Google Maps a little more closely to see if we can spot any of these mistakes and ensure that they are corrected.  In this digital age of open editing, we are all cartographers now.